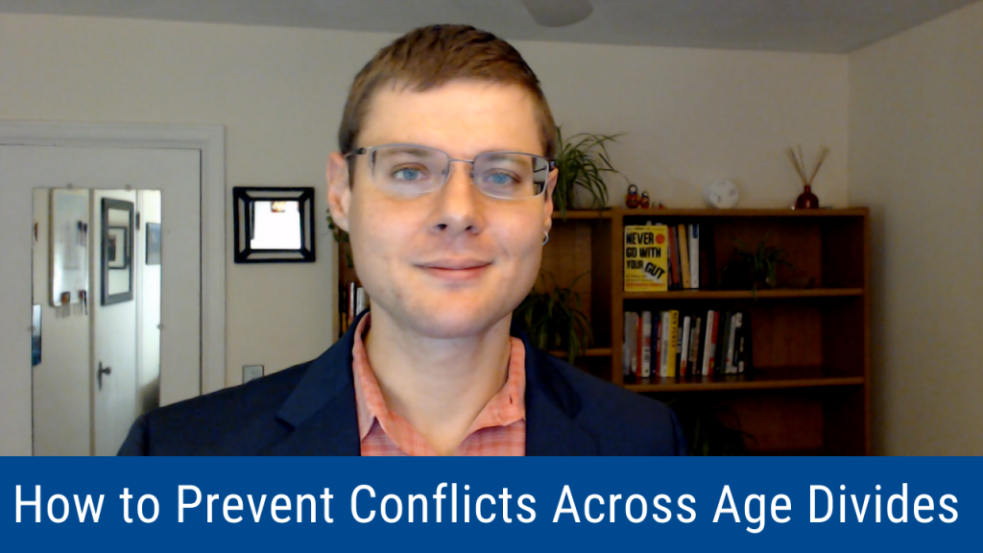 In order to prevent conflicts across age divides, organizations need to avoid dangerous judgment errors. That's the key take-away message of this episode of the Wise Decision Maker Show.

Video: “How to Prevent Conflicts Across Age Divides”

Podcast: “How to Prevent Conflicts Across Age Divides”

Links Mentioned in Video and Podcast

Hello everyone, and welcome to another episode of the Wise Decision Maker Show, we are going to talk about young people today and how to engage with them effectively. I use stories about engaging with young people, but they can be just as applicable to any other group.

How to engage effectively with young people today? We are all talking about the difference between baby boomers, the older generation, Millennials born after 1980, I was born in 1991 so technically I count as a Millennial, and the Gen Z that was born in 1995 and afterward.

Now there are not as many differences between, Millennials, Gen Z and Baby Boomers as you might have heard about. The generational differences are not as strong. The strongest difference, according to some research on this topic by neuroscientists are by people who are digital natives and use technology very easily and effectively and grew up with it as opposed to people who did not. And of course, some people who are Gen Z and Millennials didn’t grow up with technology, they didn’t use it effectively, efficiently, they don’t have social media plus most do. And many less older people use technology as digital natives. So that is a challenge and as an example for associations.

The challenge, the biggest problem is that they use tried and true old-style methods to try to engage with younger people to whom these methods don’t reach. Why do they use tried and true methods that don’t reach young people effectively? Partially because of cognitive biases which are dangerous judgment errors that cause us to make bad decisions. An example of this is the false consensus effect. That’s one of the cognitive biases, the false consensus effect. It causes older people whether in association leadership or employers in corporations, or non-profits to assume that younger people that they engage with, employees, customers and clients, younger association members are just like them, a younger version of themselves. They approach younger people as they would approach a younger version of themselves. Unfortunately, actually that is not the case, digital natives are not quite the same as older people, when they come into the workforce and associations.

For instance, what’s happening with associations, many of them use conferences, in person meetings, chapter meetings, to try and engage their members, that’s the main way of engaging members. And of course, in corporations, non-profits, other organizations have a lot of staff meetings as a way of engaging people, interacting, it doesn’t work so well for digital natives. These are people who grew up with technology, they are much more used to engaging virtually, then older people are used to engaging virtually and the younger people tend to be more introverted. They grow up with more use of technology. They grow up with less engagement through face to face. So, they tend to be more introverted, they prefer less face to face interaction. They prefer more technological engagement and they don’t like conferences and staff meetings nearly as much as older people do. That’s a big assumption, a big problem engaging between older people and younger people.

Another one, this is with social media. Many, many associations don’t have a LinkedIn group, they don’t have a Facebook group. They don’t really have a good twitter presence, social media presence, Facebook preference and they aren’t even on Instagram. And of course, a lot of employers are either, nor are a lot of nonprofits, corporations and other organizations. They aren’t on these platforms or they aren’t using them effectively at all. This is a huge problem. It’s actually repelling. It’s really problematic for younger people, for younger employees who want to be employed, who you would like to work for you. For younger employees and for younger association members. This is a big problem, because when they see that there is no LinkedIn group for the organization, for the association, when they see that there is no Facebook group, when they see that there is a poor presence, when you are posting the same thing, to LinkedIn and to Twitter and to Instagram. When you are posting like once a week or once every couple of days, that’s a big big problem and a big big no no. You need to post different things on Facebook, LinkedIn, and Twitter. You need to post at least twice a day on average, and you need to have Instagram as well and be posting appropriate content, images. You need to have a LinkedIn Group, you need to have a Facebook group, at least you need a LinkedIn group, if you are doing professional stuff and those are interesting requirements to engage young people effectively for associations, as well are organizations of various sorts.

This has been another episode of the Wise Decision Maker Show, and there is a blog on this topic, of course, linked in the show notes. I hope this episode has been good for you. I want to hear back from you. What did you get out of this episode? How do you think you might benefit? How would you handle engaging with younger people better, or if you are a younger person, how would you handle engaging with older people better, knowing a bit more about them yourself now? Please tell me and leave comments. I’d love to hear back from you. I want you to click like and follow if you like this episode and sign up for the Brother, Wise Decision Maker Show Guide. It’s going to be in the show notes that delivers to your in-box twice a month a whole variety of resources for making the wisest decisions possible.

Always my goal is to provide you with supreme value, and I hope I have done that. I look forward to seeing you on the next episode, my friends.

Bio: An internationally-recognized thought leader known as the Disaster Avoidance Expert, Dr. Gleb Tsipursky is on a mission to protect leaders from dangerous judgment errors known as cognitive biases by developing the most effective decision-making strategies. A best-selling author, he is best known for Never Go With Your Gut: How Pioneering Leaders Make the Best Decisions and Avoid Business Disasters (Career Press, 2019), The Blindspots Between Us: How to Overcome Unconscious Cognitive Bias and Build Better Relationships (New Harbinger, 2020), and Resilience: Adapt and Plan for the New Abnormal of the COVID-19 Coronavirus Pandemic (Changemakers Books, 2020). He published over 550 articles and gave more than 450 interviews to prominent venues such as Inc. Magazine, Entrepreneur, CBS News, Time, Business Insider, Government Executive, The Chronicle of Philanthropy, Fast Company, and elsewhere. His expertise comes from over 20 years of consulting, coaching, and speaking and training as the CEO of Disaster Avoidance Experts. It also stems from over 15 years in academia as a behavioral economist and cognitive neuroscientist. Contact him at Gleb[at]DisasterAvoidanceExperts[dot]com, Twitter @gleb_tsipursky, Instagram @dr_gleb_tsipursky, LinkedIn, and register for his free Wise Decision Maker Course.