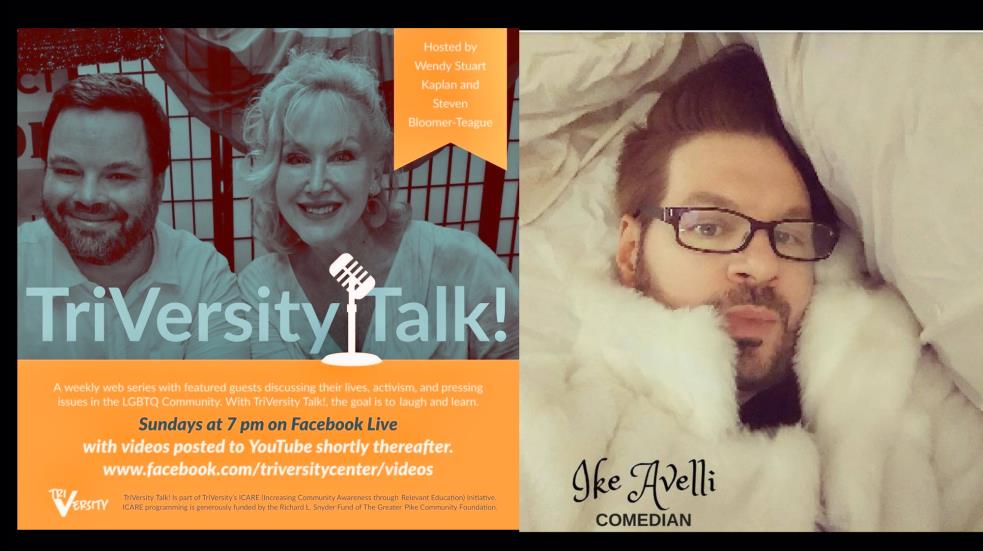 Triversity Talk is a unique web series both developed and hosted by Wendy Stuart Kaplan and Steven Bloomer Teague with featured personalities in the LGBTQ Community discussing their lives, activism, and relevant  issues within the community. It is part of Triversity’s ICARE Initiative “Increasing Community Awareness through Relevant Education” and generously funded by The Greater Pike Community Foundation.

This week’s guest,  Comedian Ike Avelli, is a producer, writer and star of the sellout show “50 Shades of Gay“, Author of “A Year In The Life of Ike Avelli....And It Ain’t Pretty” listed in the top 20 new releases on Amazon.com,  an actor and a radio host. He will be performing live at the The Rochester Fringe Festival in September.

Wendy Stuart Kaplan has spent decades working as an activist in the LGBTQ Community, and is producer and on camera host of award winning documentaries, author of “She’s The Last Model Standing” actress, model, a well known NYC nightlife personality, and host of the hilarious show “Pandemic Cooking With Wendy” on Youtube.

Triversity Talk is currently in the market for quality distribution to bring their exceptional content to a broader audience.