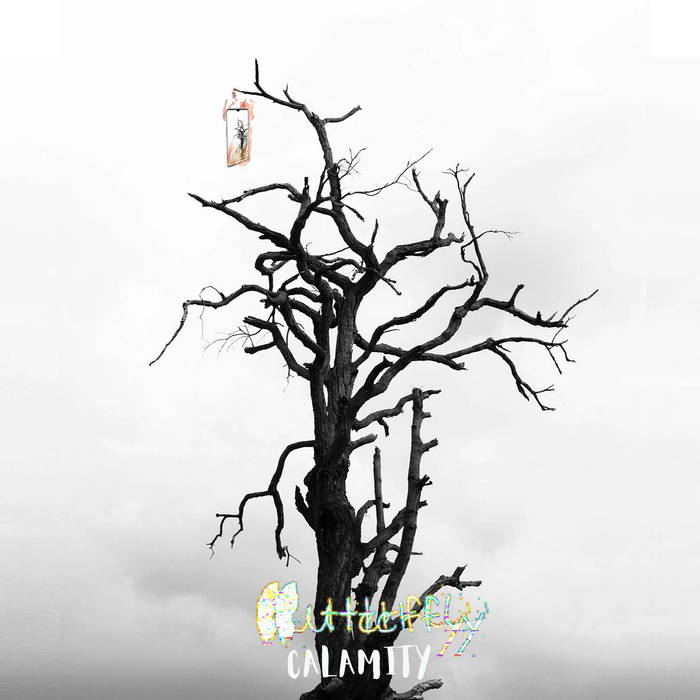 Z is a noise rock band who’ve recently put our their debut album titled Calamity after racking up a steady stream of singles since 2018. Calamity and its popular single “The Song of I” have both enjoyed great reviews, and the band now boasts a growing online fanbase. Z is also developing a mobile app with a game and narrative experience based on the band’s story, along with planning their sophomore release and upcoming tour.

Z describes their sound as “noise rock with hard rock, glitch and grunge influences,” while their songs have themes of “destruction, solitude, amnesia, wistfulness and anger. Z is a conceptual band (telling) the story of an amnesiac who wakes up trapped in the internet, making friends and enemies as they try to survive.”

“Me Knowing Tomorrow” introduces us to the Z sound with a fast rock beat and buzz saw guitars. The singing is mostly high pitched half-whispered vocals, straddling the edge of seriousness and goofiness. It actually reminded me of the voice that comedian Jim Gaffigan uses to imitate the horrified thoughts of his audience (“What kind of jokes ARE these?!”). The song itself is like a twisted version of a ’50s sock hop tune with tons of helium. The guitars veer from distorted to silky smooth, but always at the whim of the pitch knob, shooting almost out of normal hearing range at a moment’s notice. Given the album’s story as outlined by the band, the continued imprecations of “I never wake up” make sense even though it’s creepy as hell. All that said, I really liked this track!

“The Song of I” is the album’s “Hit Single” and proceeds in pretty much the same fashion as track one, though this time featuring high pitched guitar notes ping-ponging across the stereo field. The chorus vocals are packed tightly and glued together with distortion. The guitars, both processed and straight, create a lot of the track rhythm just by the way they’re played, and the simple drum beat almost seems to be following along in their wake instead of leading. This is the kind of song where extreme distortion is itself an instrument.

“Void Prince” has a surprisingly proggy structure that reminded me of a riff by the prog-funk band Material. In fact, at first I was afraid this was going to turn into a traditional song, but not to worry. This is a band that seems to have built their sound on pitch shift. It’s certainly an interesting strategy and results in some cool effects. “Mega Bytes” has another cool riff of the type that seems to come to these guys quite easily. As this is my first couple listens, I hesitate to say that these songs are sounding similar since that might be my learning curve, but I can certainly say that the band’s sound is totally consistent thus far!

“No Likes” has a fun, off-mic human moment at the start. This one has an energy distantly related to Devo’s wilder outings (like, before they were signed!). Does this song refer to the sad, unloved status of our Twitter or Instagram posts? I’d like to think so! “Nemesis” is extremely dark dream pop that erupts into a total noise fest, with the pitching effects approximating the sound of record scratching (and I DO mean scratching!). It features some of the sharpest and coolest guitar noises thus far.

“Burn” has even more of a pop sheen, valiantly trying to emerge from the waves of static while being constantly pushed back into its noisy crib. If you happened upon this track out of context it would sound nearly commercial, though with the usual Z extremes of tone and performance. Very surprised that this one wasn’t the hit single! “Winning” features a simple and surprisingly gentle piano riff, with a vocal that’s so close-mic’d that you can feel the very breath moving up and down through the vocalist’s body. It’s a smart move to back off the madness for a moment of sunlight. “Finding Out You Mean Nothing” has a cool spy-like bass riff in a medium-tempo rocker just packed to the gills with the speed-distorted instruments framing some really nice harmony vocals. I love the repeated chorus of “you never should make me happy!”

The final track “Machine Learning” surprises with an almost baroque electric guitar figure, which carries a melancholic punch when combined with the sweet harmonies. Z pretty much saved the best for last, as this track features both sides of their sound in two convenient sections: the opening is very straight, while the second part brings back all the noise patches from the rest of the album. Overall this track is still one of the most conventionally listenable and even beautiful, and my clear favorite.

It’s a cliche to say that “this is music like you’ve never heard before” but these guys have certainly chosen a strategy and stuck to it. I daresay you won’t often find these particular sonic elements put together in this particular way and working so well in the bargain! I can’t imagine where they go from here but I’ll be watching!