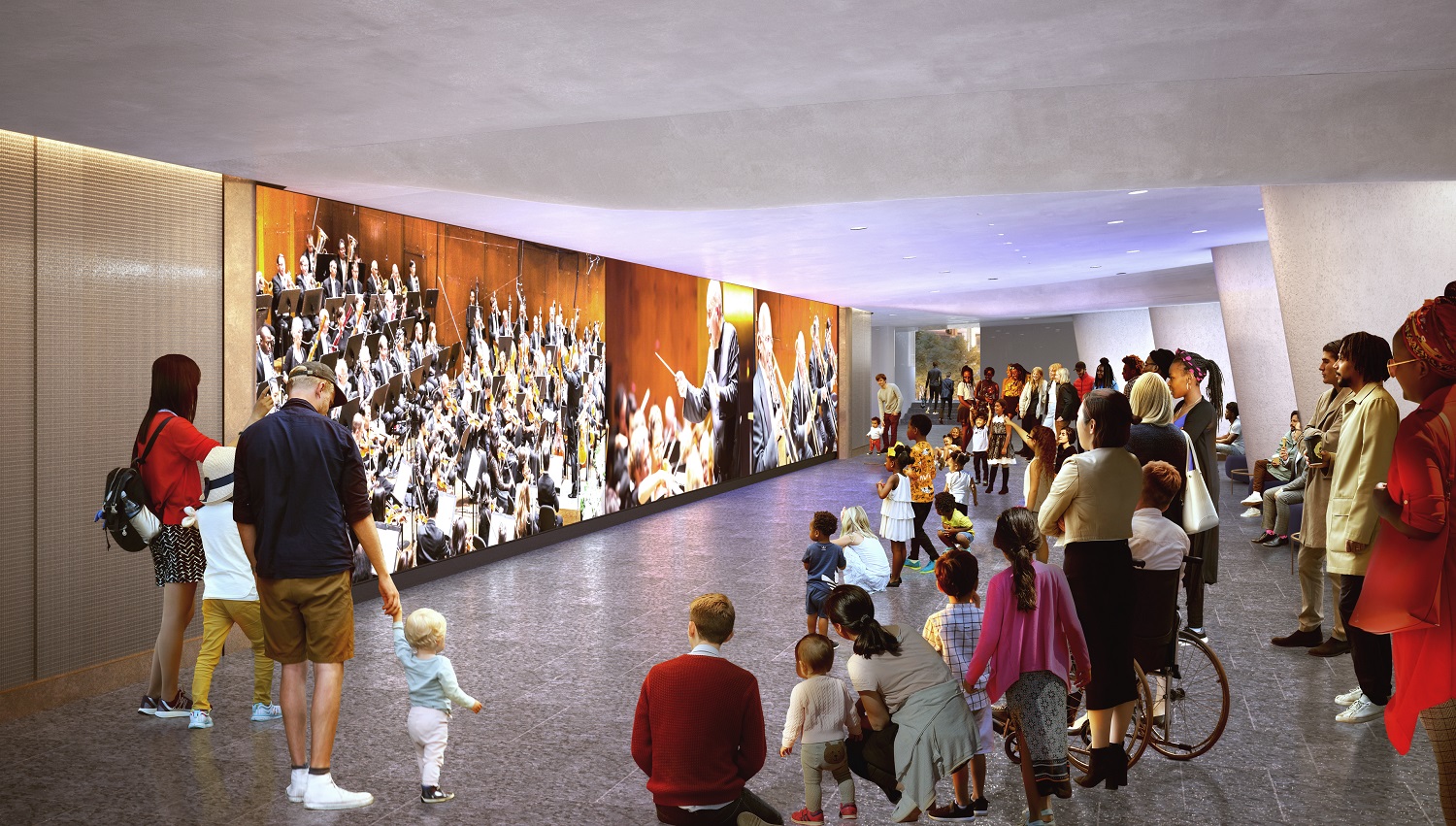 Katherine Farley, Chair of Lincoln Center for the Performing Arts, commented: “The goal of accelerating this project is to invest in New York City at a time when we all have a part to play in its recovery. I want to pay tribute to the many people who have supported bringing this effort forward. In doing so, we are creating not just one of the world’s best cultural venues, but a space that welcomes our broader community.”

Peter W. May, Board Co-Chairman of the New York Philharmonic, commented: “Supporting the arts takes on a new, deeper meaning at this moment in history. It has been a long road to securing an advanced, cutting-edge home for the New York Philharmonic; New York’s hometown orchestra deserves the best. With its new design incorporating true warmth and beauty, this Hall will serve generations to come.”

The acceleration of the project will boost New York City’s economic recovery by creating jobs and opportunities. In the near-term, the renovation will provide immediate and significant economic support, generating more than $600 million in project-related economic activity through construction and into Fall 2022. This includes an estimated 6,000 jobs throughout the City and State, of which 3,000 are construction jobs.

There will be a minimum 30 percent construction participation by Minority- and Women-Owned Business Enterprises, 40 percent workforce inclusion from underrepresented communities, and a workforce development program established with area officials and community members to create additional full-time job opportunities for local residents.

The leadership of Lincoln Center and the New York Philharmonic today updated the campaign’s progress. To date, $500 million, or over 90%, of the $550 million project budget has been raised, the vast majority from private sources. First Republic Bank is providing bridge financing support.

Henry Timms, President and CEO of Lincoln Center for the Performing Arts, said: “The reimagined David Geffen Hall will be integral to welcoming audiences back to Lincoln Center. We want to thank the design team, construction team, board members, supporters, and staff who have all come together to make this happen for New York City now. This has been a huge team effort. We believe wholeheartedly in this great city’s resiliency.”

Deborah Borda, Linda and Mitch Hart President and CEO of the New York Philharmonic, said: “Our accelerated renovation plan for David Geffen Hall allows us to make the most of COVID-19 closures to complete the renovation process faster and more efficiently, without stops and starts. The Hall’s immediate and long-term benefits to the community, Lincoln Center, our Orchestra, and the world of music are unparalleled. We look forward to returning to David Geffen Hall and welcoming everyone to our new, state-of-the-art home in Fall 2022 … a major signal that New York City is back.”

The New York Philharmonic will perform a 2021–22 season, with full details to be announced in June. To accommodate the continuous construction timeline, the Orchestra will perform in several New York City locations, which will be announced with the full schedule in June.

About the Reimagination of David Geffen Hall

The Theater
Diamond Schmitt’s design for the new theater introduces a “single-room” concept, eliminating the proscenium and moving the stage forward by 25 feet, with audience seating wrapped around it, bringing all seats closer to the performers and providing acoustical and visual intimacy. The new theater is designed to support a wide range of performance initiatives. Natural wood and curvilinear forms create an immersive experience that transforms the room into a contemporary, sculpted design. Seating capacity will be reduced by 500 seats to 2,200, and a steeper rake (incline) will be added to the orchestra level, significantly improving acoustics and sightlines. It will also have improved accessibility for guests, staff, and artists with disabilities.

The new David Geffen Hall will also have state-of-the-art HVAC systems, filtration and air purifying systems, antimicrobial technology integrated into select surfaces, and a number of additional improvements developed using recommendations from a variety of sources including the CDC (Centers for Disease Control and Prevention), OSHA (Occupational Safety and Health Administration), and ASHRAE (American Society of Heating, Refrigerating and Air-Conditioning Engineers).

Public Spaces
David Geffen Hall’s main lobby will double in size and open up on three sides to connect with the campus, and a new Welcome Center on Broadway will offer a portal to Lincoln Center for the public. At the core of the new lobby will be a media streaming wall, which will show concerts and events for free in real time as well as other digital material. The reconfigured and reenergized Grand Promenade will create one of the largest gathering spaces at a performance facility in New York City, with ability to welcome more than 1,000 people for an event. During performances, there will be expanded intermission seating and bar/food service, including enhanced access to the terrace and new promontories overlooking the main level.

A dynamic new addition is The Sidewalk Studio, visible from the street on the corner of 65th Street and Broadway, which will be a home for educational, artistic, and community activities — a window into the performers and ideas that live on campus. A “Lightwall” will wrap around three sides of the interior top of the building, creating space for dynamic mood and architectural lighting. Eleven thousand square feet of office space will be located behind the “Lightwall.” The entire North Façade of the building will be reimagined as a “canvas” for site-specific works, honoring Lincoln Center’s long tradition in the visual arts. All of this will be accomplished while respecting the original and iconic Max Abramovitz building exterior. 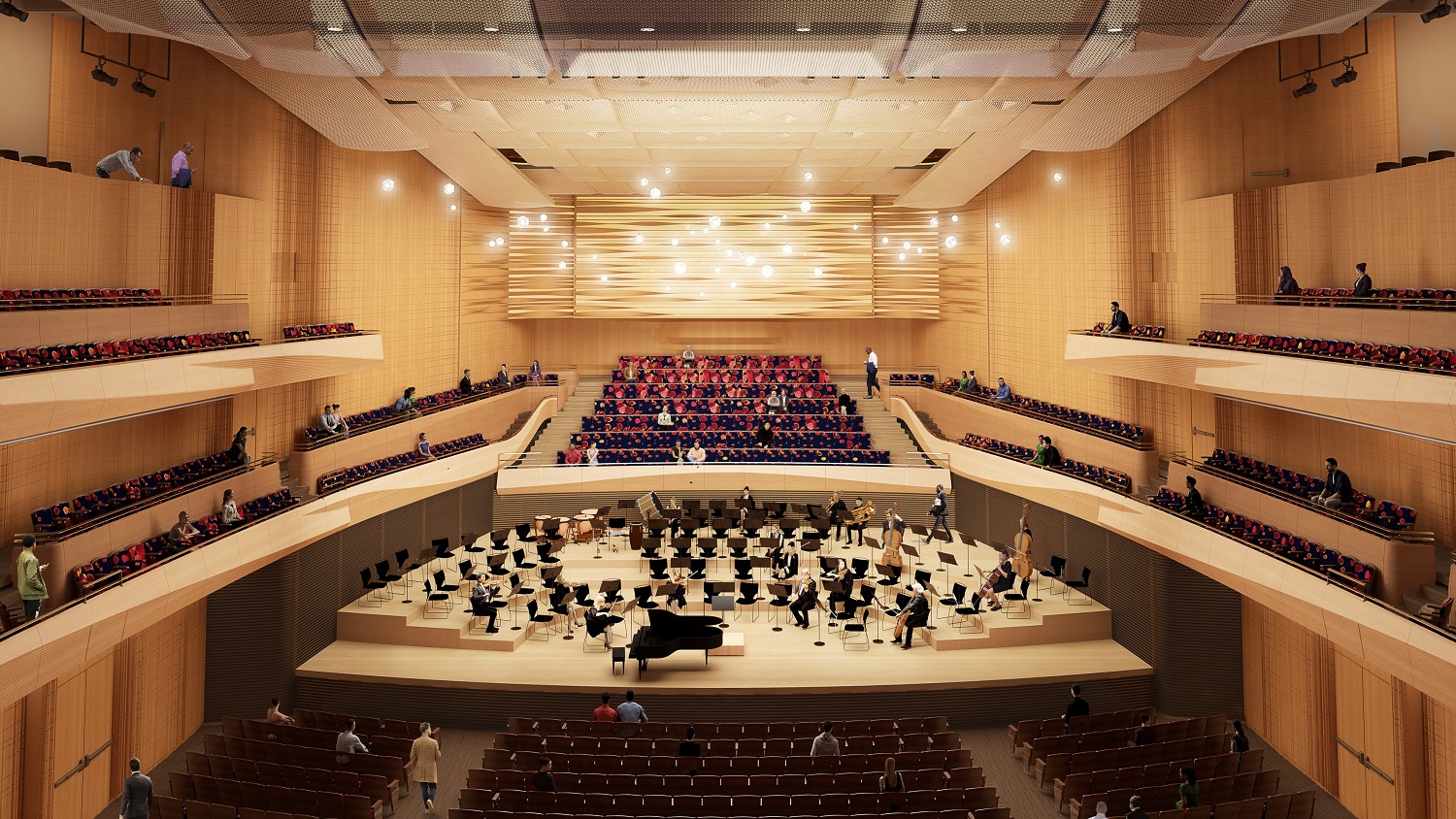