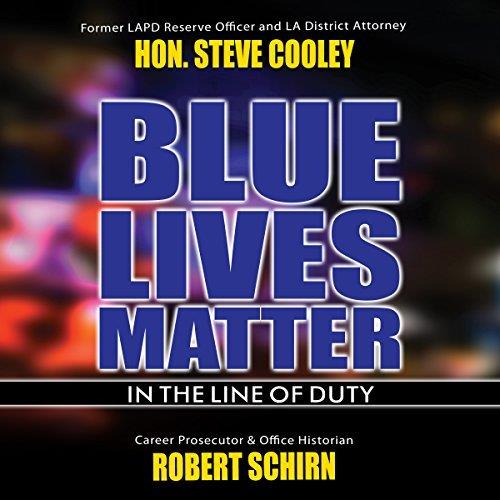 "Blue Lives Matter" is a audiobook that explores the line-of-duty deaths suffered by the law enforcement blue family. This audiobook examines the deaths of eight police officers and one police canine in Los Angeles County. The chapters portray the fallen officers and the canine as true heroes who each made the ultimate sacrifice in service to their community.

The cases include the murder of two officers solved over 40 years later; an officer murdered in front of his young son; two officers kidnapped and taken to an onion field where one officer is executed; an undercover officer murdered during a multi-million dollar drug transaction; an off-duty officer murdered by two gang members while riding his bicycle; and a cop-killer who fled to Mexico to avoid prosecution.

Co-authors Steve Cooley and Bob Schirn discuss each case in detail. Each chapter discusses the incident that cost the officer his life. The court proceedings are reviewed, including victim impact testimony of the effect of the officer's death on family members and fellow officers. A "lessons learned" segment in each chapter is designed to increase officer safety and awareness of dangerous situations.

Steve Cooley is a career prosecutor who served three full terms as the District Attorney of Los Angeles County. He was a reserve police officer for LAPD. He is uniquely positioned to discuss his involvement in each case and eminently qualified to provide perspectives and opinions on each case.

Download your copy of  "Blue Lives Matter: In The Line Of Duty" written by authors Robert Schirn and Steve Cooley and narrated by Doug Greene on Audible in the United States here:

The official website for Beacon Publishing Group may be found at www.beaconpublishinggroup.com