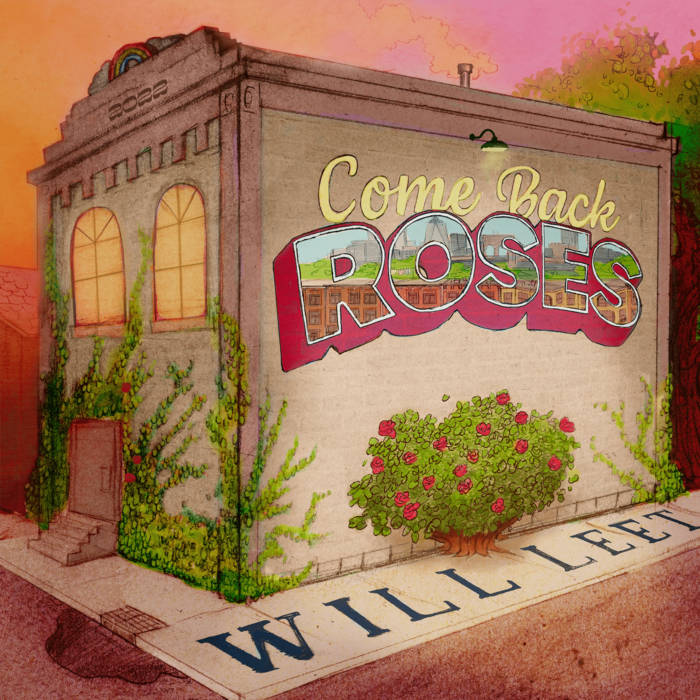 Brooklyn-based singer/songwriter Will Leet released his debut full-length record Come Back Roses just a few months ago. The album has been a long time coming and is a result of Leet and his partner Chris Burns’ seven years of songwriting. Over the course of the project, the two branched out to five other studios across New York, Connecticut and California, enlisting over 25 musicians to help them record this album. The results are something wholly unexpected and dynamic at the same time. Filled with moments of folk, hard rock, country, pop, bluegrass and you might even hear some baroque pop in the mixture, every track is different with a common underlying theme which is the great lyricisms which tell a story. Leet has gone above and beyond here to give us quite an undertaking with Come Back Roses which I’m sure a lot of us will enjoy.

Come Back Roses opens up with “Wildflower Thief,” where right out of the gates some acoustic guitar comes strutting in on this track. Leet’s vocals spread over this track in a warm embrace. As his voice lights up the sounds, the moving music comes in for more depth. I was getting some folk, Americana and baroque pop all at once. The strings courses through this track for a warm undertone. Next, some drums sidle in for a more full-on approach. I like this mixture of folk and rock n’ roll. It made for a great sound. An adamant drumming beat arrives on “The Corner.” Some combined vocal harmonies come in for a wonky vibe. Next, Leet’s vocals arrive for a searing sound. I was getting an Americana/hard rock vibe here as well as a bluesy twang. The saloon-style piano was also a great addition. Loving the energy of this song. More acoustic guitar enters the sounds on “Cloudy Day.” The vibe was very melodic and mellow. As Leet’s vocals light up the sounds, the music had a laid-back feel. Next, the music becomes a more fuller undertaking with more instrumentals coming in in support. There was a touch of nostalgia to this sentimental track, giving it a burst of emotionality.

The sounds of the fiddle, acoustic guitar and banjo highlights the country-bent/Americana “Country Fair.” Some xylophones also add some unconventional instrumentation, sounding both like a hoedown and an indie rock track. This bouncy number will have you on your feet in no time. More acoustic guitar comes through for a moving sound on “Louisiana Goodbye.” The guitar alone accompanies Leet’s vocals. This made for a great acoustic vibe. More slow burning instruments come in as the steel lap guitar wraps you in its sound on “NYC Cowboy.” Leet’s vocals come across drenched in reverb. He sounds like a lone cowboy belting out the blues at a NYC bar. Next, a hard rock twist comes in and lights up the sounds.

On “Alice (ft. Sammy Rae & the Friends),” strumming on the acoustic guitar and some spaghetti western guitars and the banjo gives this song a country/Americana/bluegrass vibe. The fiddle was also a great addition. On “Satan & the Sailor,” a jaunty drumming beat and the guitars and banjo draws listeners in closer to the sounds. This was an energized folk/Americana romp filled with great rhythms and beats. Some piano enters the sounds here on the piano ballad “Rainbow.” The music meanders for a bit as it builds in sound. This was an emotionally powerful ballad and the artist chooses to end with a big bang with this moving finale.

On this album, immediately right when hitting play, the wash of warm vocals and folksy cadence will reel you in. I like how Leet keeps us on our toes and mixes a range of other genres as well into his folk sound. At one instance you get some acoustic and country and the next you might get some hard rock. With his genre-bending sound, there’s no way you can pigeon-hole this artist to just any one genre. On a whole, he has gone on to create a sound that is distinctly his own – which in itself is an awesome effort. I also loved the energy of these tracks as the band threw themselves into the music. All in all, this was a good start and I look forward to seeing more soon!