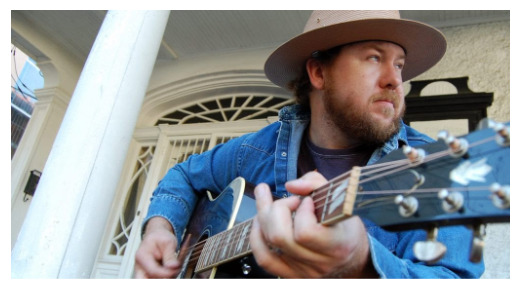 Jesh Yancey is a folk singer and songwriter based out of Denver, Colorado.  Jesh began playing and writing music in 2002 and has been crafting his sound ever since. After failing out of college the first time and running off to join the Navy, Yancey found himself on the Gulf Coast with a pen in his hand and something to say where the majority of the songs for Livers and Diers emerged. His newest EP "Maybe it's the Drugs," is a bold sound from Yancey as he builds upon his classic sound.
We had the chance to check in with Jesh Yancey, as he starts the New Year in style. Let's dive in, shall we?

Last year we saw the release of your debut EP. When writing the new songs, what was your inspiration behind the pieces?

Most of the songs were written back in 2016 with the exception of Ridin’ High. The songs are all derived from what was going on at the time. My Little Soul and Me and Maybe it’s the Drugs were inspired by a trip my buddy Chance Gray and I took down in Florida. My Little Soul was written as the sun was coming up on a Sunday and it just sort of manifested itself. That whole night we were jokingly blaming all the world’s problems on drugs, such as pain killers,  prescription pills and whatnot. We kept saying “maybe it’s the drugs, man” and then about a week later I wrote Maybe it’s the Drugs as a protest to the opioid epidemic. When in Rome was written after an experience I had going to a Destin, FL bar where they had these huge TVs with football games on and I had on a  tye-die t-shirt and I had long hair back then so I was feeling out of place. I wrote it to be used as a lens for looking at American issues such as excess consumption and stuff like that. Take a couple more when you only need one!

When creating and penning the latest tracks, what artists or influences did you channel?

I constantly strive to put as much thought into my songs as Todd Snider does. Aside from him I tend to listen to a lot of jam bands, Widespread Panic and the Grateful Dead, so they’re always influential in some ways. And then Guy Clark, Ray Wylie Hubbard and folks like that are the reasons I write songs so, of course, they’re always in my subconscious.

You seem to be very hands on in the process of your music and songwriting which is GREAT! Can you walk us through the process for the latest release?

The premise was simple, I booked some studio time at a little place in Mobile, AL and Lizz Hough, Ryan VanDyke and I went in and recorded all the rhythm tracks and then later Jef Funk and Jeremy Ault added the lead instrumentation. We had been doing these songs live all around the Gulf Coast so it was pretty easy. It came out just the way I had hoped. They were songs that were related thematically and that represented what me and The High Hopes are doing.

The whole EP from start to finish is absolutely brilliant! Can you tell us how you created the idea or concept for the record and how you brought it to life?

Maybe it’s the Drugs was supposed to be a joke. I was going to record it as a way to take a snap shot of the band before I moved to Denver from Mobile. I had these 5 tunes that wouldn’t fit with anything I am going to record in the future so I chose them to put on this EP. Originally I was going to print about 100 CDs and just give them away to the folks I knew would appreciate them. But they turned out much better than I planned so I decided to release it digitally and here we are!

When writing songs, what key instruments do you start with? Guitars, pianos, vocal etc? Or a combination of things?

For me it’s always the guitar and some time to let things happen. I only play one instrument and it serves as a tool for writing.

With the new songs in tow, how does the song differ from your prior work? Or who does it feed into the upcoming?

This EP was less complicated than my first album, Livers and Diers. I didn’t have a large budget so I decided 5 songs was enough to get my point across. Maybe it’s the Drugs is much more raw than Livers and Diers and as a result I feel it’s a little more authentic to what I’m doing. I think that once I get the next two records out it will be easy to see that Maybe it’s the Drugs is the foundation for what I’m building.

As we head into 2020,what do you want to accomplish in the New Year?

As far as 2020 is concerned I’m going to do some more solo touring and work at making connections across the country. With any luck I might get over to Europe but that’s certainly a lofty idea. I have plans for a “songwriter record” but I’m not sure when I’ll start trying to record it. Hopefully folks will get hip to Maybe it’s the Drugs and I’ll be able to make all those things happen in 2020 so that in 2021 I’ll be able to start the “jam band” record.

Connect with Jesh Yancey via: