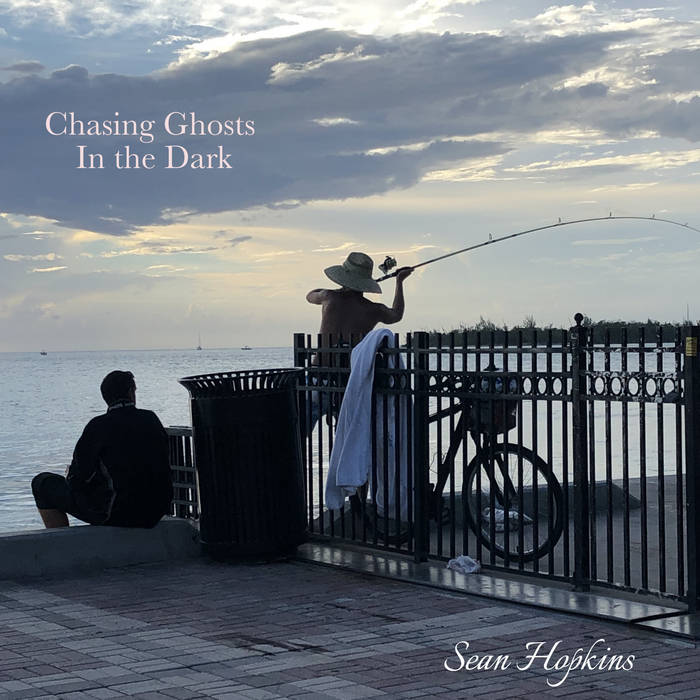 Sean Hopkins is a guitarist and singer-songwriter from New Hope, Pennsylvania. He began playing guitar at a young age, then shifted to bass while playing in several indie bands, even getting signed to a label and releasing a few records with his band Stranger to Stranger. Burning out from constant touring, long car rides and sleeping on floors, Hopkins put his music on the back burner until reemerging as a solo artist about six years ago. He’s just released his new indie folk album titled Chasing Ghosts in the Dark.

Most of the writing on this album started pre-pandemic and continued through lockdown. Hopkins, using the singer-songwriter approach, often began writing on acoustic guitar, “which is in many ways the hardest step to take.” He then recorded what he calls a demo into his work station and added overdubs. For the final versions, Hopkins hired local producer Woody Jiang to convert his home into a working studio for about six weeks, followed by six months of mixing and mastering on Pro Tools. At this point, if Hopkins felt something was missing, he gave producer Jiang “free license to interpret my thoughts and add in elements like piano, percussion, strings, electric guitar, etc. This is where he served as a session musician as well.”

“All I Ever Wanted” begins simply with two minor chords on the acoustic guitar, with short electric guitar notes bathed in reverb. Hopkins’ singing voice is mid-range, conversational and close up. When the uncredited full band kicks in (digital or real, I can’t tell) the song feels a lot like a track from the early Neil Young solo LPs, especially in the background vocals. The sentiment is simple, as Hopkins says to a lost love: “All I ever wanted was you, all I ever needed was you.” I like the dynamic arrangement where the other instruments drop out occasionally, leaving the acoustic guitar (complete with guitar body percussion) to play by itself. “Light Shades Grey” continues in a similar vein but with a slightly faster picking tempo on the guitar and an even more enveloping array of background synths and piano, brought to the fore with a dreamy, multifaceted mix. It’s a compelling song but even more amazing to have come from a relatively makeshift home studio. There’s a noticeable edit or pause toward the end but nothing to get landed in indie pop jail.

“Winter’s Breath” starts with guitar harmonics similar to the Yes classic “Roundabout.” It’s got a guitar arrangement similar to Elliott Smith or even Paul Simon. Again Hopkins matches his acoustic and vocals with little rain droplets of heavily echo’d electric guitar notes, so I’m thinking this may be his go-to style. Hopkins states that this song was inspired by “a 2019 trip to Key West and watching street performers do their thing in Mallory Square” which helped jump start his desire to write songs again.

“Like a Whisper” retains most of Hopkins’ established elements but within a propulsive rock context. He strums the lower strings of his acoustic in a more baroque, droning style, possibly in a special tuning. The riff could even be a callback to Jimmy Page’s acoustic outings on Led Zeppelin 3. “Tears Surround You” is almost painfully intimate, with a simple 3-part chord scheme and gentle, introspective vocals. When the strings and synths join in, you’ve got some amazingly transcendent dream pop. Hopkins says he was “sitting in my reading room at home while rain poured down outside” which inspired this song.

“Never Say Never” features Blaise Hopkins on additional guitar. This one feels like a classic ‘70s acoustic ballad with expansive strumming and Tex-Mex electric guitar notes.  Hopkins again uses his intimate, almost-speaking vocal voice for a song that refuses to be stuck to any particular time or event; more like a quiet inventory of the narrator’s hopes and emotions.

The phrase “Chasing Ghosts in the Dark” is another way of describing what happens in a church service, and in fact this song was inspired by Hopkins having Sunday morning coffee on a friend’s back stoop, watching church goers have a socially distanced parking lot service due to Covid. The strummed intro is heralded with somewhat eerie “church bells” sound effects. Lyrically this song pretty much describes what Hopkins witnessed that morning, and it’s an example of how the simplest events can inspire a great songwriter. At the conclusion, even while casting a perhaps bemused eye on the churchgoers, the narrator concludes by acknowledging his own emptiness.

On the other end of the spectrum, Hopkins says that despite most of these songs being about longing, “there are happy moments too.” “Wish With Me” captures such moments on the beaches and in the forests of Costa Rica. It’s a more upbeat track with a smoothly propulsive acoustic riff, keyboards, handclaps (real, not digital) and another reassuring vocal. “Summer Stare” opens with an eerie swell of sound before introducing a fast Leo Kottke-style acoustic riff. Though based on the simple act of watching a hummingbird, in Hopkin’s hands this becomes an ode to potential love who mysteriously comes and goes. “It’s Alright” concludes the album with a unique descending riff shared by guitar and piano, with just a touch of dissonance that well-serves the lyrics where the narrator acts as a reassuring presence in an unsettled place or state of mind. It works doubly well since Hopkin’s voice does not betray absolute 100% certainty.

In sum, every one of these songs reveals Hopkins as a talented and seasoned songwriter and performer, and this album should have moments that hit home musically and emotionally for every listener.